Director Ana Lily Amirpour’s A Girl Walks Home Alone at Night is the vampire movie Jim Jarmusch should have made. Or perhaps the one he would have made 30 years ago. 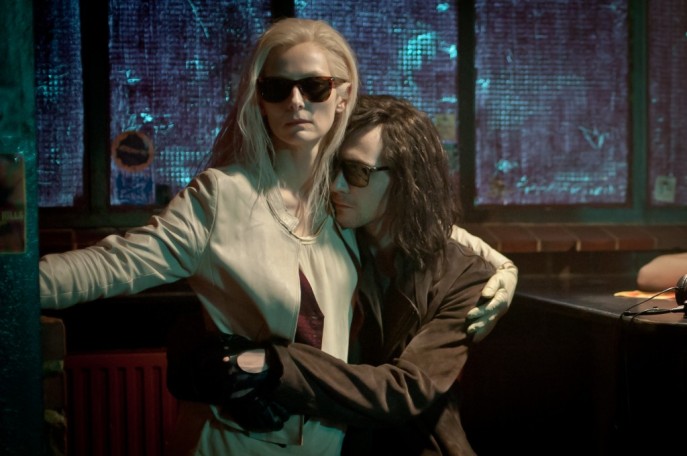 “I hope they serve PBR in hell.”

While we’re on the subject, don’t patronize me about how Only Lovers was an allegory to the plight of the aging rockstar, the death of rock and roll, or some other grandiose malarkey. Its attempts at tongue-in-cheek humor about immortals cavorting with dead artists was groan-inducingly pretentious to a Diablo Cody-esque level. (And I don’t see how the fuck Tom Hiddleston—AKA morose, bootleg Jared Leto—whining nostalgic about the merits of vintage guitars and LPs equates a “thoughtful, atmospheric” film.)

As a former Jarmusch fan—Mystery Train and Down by Law were at one time two of my favorite movies—my two cents is that the guy hasn’t made a worthwhile flick since Ghost Dog. But hey, perhaps I just have a softer spot in my heart for the hipsters of yesteryear (Jarmusch’s castings of Tom Waits and John Lurie) than the egocentric shitbags he’s portraying nowadays.

John Lurie and Tom Waits in the phenomenal Down By Law—back when being a hipster stood for something!

Oh, and about that other movie…

What was I talking about? Oh yeah, A Girl Walks Home at Night, that terrific Iranian vampire flick that feels a lot like those great Jarmusch films of old.

It opens in the fictional town of Bad City, as our brooding, Iranian James Dean of a protagonist Arash (Arash Marandi) steals a cat from a junkyard for no apparent reason. While this occurs, gypsy organ music that sounds like something off Tom Waits’ Rain Dogs plays in the background.

Then there’s the bleak, barren industrial cityscapes that Arash walks through as he puffs cigarettes in his dark shades. We see the recurring image of an open mass grave in a dried up canal—an early signifier that rules of modern law and logic are less important to this narrative than the weird we’re about to be immersed in. And with these stylings of offbeat mystery, sinister imagery and grim coolness, the influence of black-and-white Jarmusch classics like Down By Law and Stranger Than Paradise is undeniably apparent from the get-go.

After a bit more of Arash chain-smoking and cruising around in his vintage hotrod, we get a picture of his family life, which is far less hip. Arash’s dad is a feeble junkie, heavily indebted to a slippery goon who looks a bit like a hybrid of Ivan Drago and one of the Taken thugs. 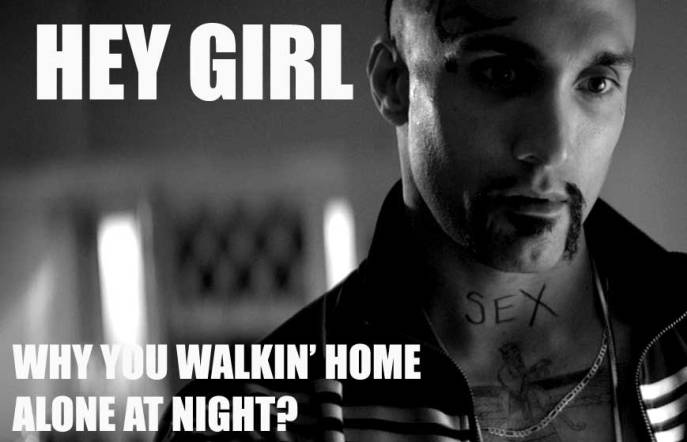 Our last major character (outside of House of Cards‘ Mozhan Marnò as a beautiful prostitute) is, of course, The Girl. Bad City is kind of like an underpopulated Gotham, and The Girl (Sheila Vand) is its vampire bat-woman. She patrols the streets in a black cloak and one of those black-and-white French sailor shirts that hipsters seem to fancy. She also rides a skateboard. Consider her the anti-manic, empowered pixie dream girl.

A large part of A Girl Walks Home Alone at Night’s intrigue is its balance of beautifully bizarre art-house stylings mixed with the type of live-undead romance that worked so charmingly in Let the Right One In (and failed so miserably with those apathetic, narcissistic mopes from Only Lovers). A magically lit scene set to the tune of White Lies’ aptly titled “Death” shows our lonely outcasts basking in the shadows of a disco ball as they come together in the night. Like so much of the film, it blurs the line between dream sequence and traditional narrative, and feels more like something out of Lost in Translation than your typical bloodsucker fest.

Then there are the parts of the film that feel more like art-house for art-house’s sake—but that’s really not a bad thing here in less you came looking for Blade 4. A scene halfway through shows the film’s randomly everpresent cowboy drag queen dancing with a balloon in an empty dirt lot. What does it mean? What does it say about the movie? Factually, little. Artfully, it’s one of A Girl Walks Home’s many bizarre and inexplicable gifts to simply take in. Or maybe it’s just a rehashing of American Beauty‘s plastic trash bag scene. You decide. 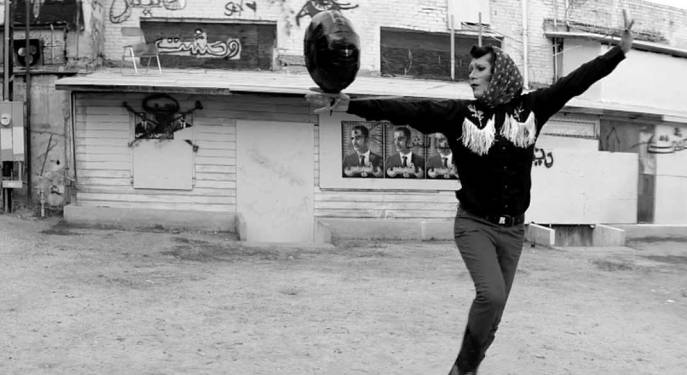 A Girl Walks Home Alone at Night leaves us with a few other unsolved riddles. Mainly, what the fuck is the deal with that cat? Still its blend of art-house, horror and romance makes for one of the best additions to Netflix’s recent catalogue–and arguably cements it as the best vampire flick since Let the Right One In.

If you want a more traditional vamp story, try Stake Land (also on Instant). If you’re a Jarmusch fan with a dark bent, it doesn’t get much better than this.