For fans of serial killer cinema rooted in true crime, it’s not much of a stretch to say that David Fincher’s Zodiac is the modern-day gold standard. Fincher, a pioneer of both music videos and digital filmmaking, crafted scenes, moments, and frames that were at once sublimely enchanting and forebodingly ominous—convincingly turning the innocence of the freewheeling late-60s Bay Area into the tapestry of murderous havoc and foggy mystery that the film’s namesake created during his bloody reign of terror.

And while I thought Fincher’s Gone Girl was massively less inventive from a narrative standpoint (blame author Gillian Flynn), it and Zodiac shared an undeniably singular aesthetic. If I were a snooty film professor, I’d probably call this… “Fincherian.” This comes through in the director’s insistence on painstakingly calculated camerawork, trademarked by sweeping, panning—and often surreal—low-light shots that makes many of his frames look like Gregory Crewdson stills. 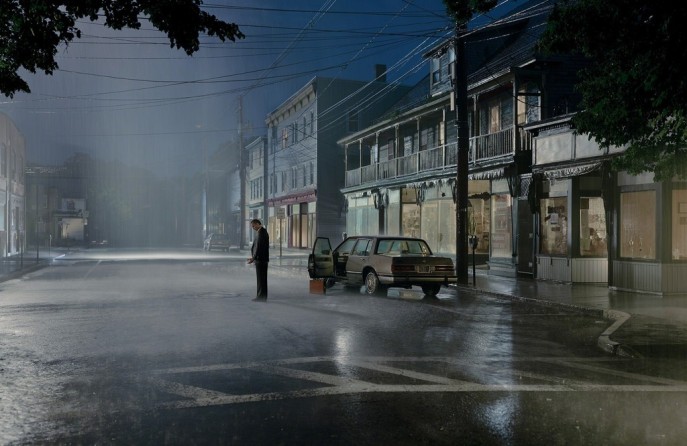 A photograph by Gregory Crewdson… or what it feels like to be in David Fincher’s mind.

OK, that’s enough Fincher ass-kissing (I’ll point out that while he helmed Se7en, Fight Club and Panic Room, Zodiac is his only film I’m really nuts about).

The point is that, in many ways, Netflix’s Mindhunter feels like a follow-up to Fincher’s 2007 mystery-thriller surrounding the Zodiac Killer. This is apparent even in its opening scene—before the credits introduce, you guessed it, Fincher as an executive producer (he’s also a director of four of the first season’s 10 episodes).

And much like the point-by-point casefile and eyewitness bent toward true-crime upon which Zodiac was founded, Mindhunter also does its homework. Its account of the onset of criminal psychological profiling by John E. Douglas, Robert Ressler and Dr. Ann Burgess (with pseudonyms in the show), plays closely to the script of Mind Hunter: Inside the FBI’s Elite Serial Crime Unit, co-authored by Douglas.

After leaving off on one of the most baffling and psychologically fascinating serial murder cases in history, it’s fitting that Fincher would pick up a story that, circuitously, started where Zodiac left off (i.e., when you can’t track down a serial killer, how do you track down his mind?). The fact that Mindhunter is adapted by Joe Penhall lends the project even more grim potential (Penhall adapted Cormac McCarthy’s The Road).

Viggo Mortensen and Kodi Smit-McPhee in The Road: a feel-good father-and-son tale about foraging for treasures in the woods.

So yes, Mindhunter has a decidedly “Fincherian” aspect to it that should appeal to fans of Zodiac. That said, I’m not hailing it as the second-coming.

But before I get into criticism, I should probably give a little premise-oriented background.

Jonathan Groff plays the lead as Holden Ford (AKA John E. Douglas), a bright-eyed upstart federale who gets taken out of the field after semi-successfully dealing with a bloody hostage negotatiation. Shortly after, he meets up with a grizzled veteran Behavioral Science agent named Bill Tench (Holt McCallany as Robert Ressler, in the series’ most dynamic and enjoyable performance). As they go around the country lecturing small-town cops on FBI techniques, Ford makes it clear that he has much loftier ambitions than status-quo educational seminars. He’s a guy who wants to change things. And he won’t be stopped. 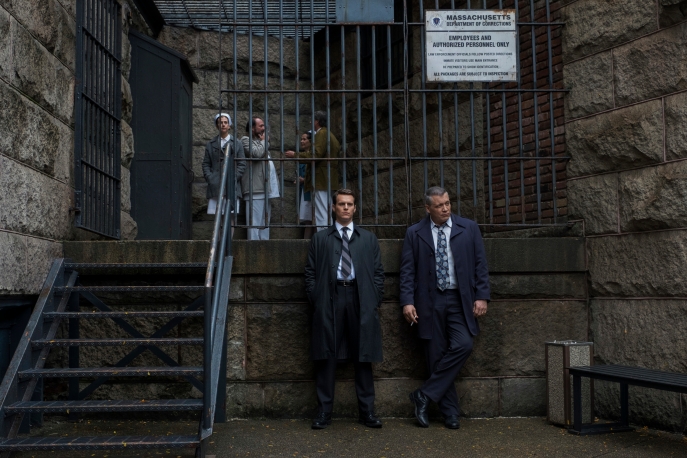 Groff and McCallany: The He-Men G-Men.

Ford starts by visiting maximum security prisons to interview serial killers, something Tench begrudgingly becomes an accomplice in. As their insights into the most warped criminal minds start developing patterns that lead to results in the field, they’re joined by an East Coast professor, Dr. Wendy Carr (Anna Torv playing Ann Burgess), who believes in the scope of Ford’s organically manifesting mission from God.

The series is at its best when it depicts conversation with deviant psycho killers like Edmund Kemper (the scene-stealing Cameron Britton, a seemingly gentle giant who also brutally killed his family and several young women) and Richard Speck. A twisted dynamic that begins to shine light on Douglas and Ressler’s revolutionary work comes through here, likely enhanced by parts of this dialogue coming from actual recorded conversations with the real-life killers.

The subsequent application of Ford and Tench’s findings to cases involving sadistic murderers gives an already taught series that edge-of-your-seat thriller appeal. Simply put, it’s where the series bridges its procedural narrative with the reason we go the movies. And it works flawlessly.

Unfortunately, Mindhunter loses traction as it veers away from being a traveling case study on infamous serial killers and goes more into petty, bureaucratic FBI conflicts and relationship subplots. While the leads are very well fleshed-out characters as one would expect from Fincher, rigidly stereotyped performances from a bureaucratic FBI chief and a bumbling, deceitful assistant agent sidetrack the show into dull conflict, seemingly designed for the sole purpose of keeping our ace agents in a David vs. Goliath pigeonhole. And then Wendy Carr spends half an episode trying make friends with a stray cat. And episode 8—in which a pervy high school teacher gets in trouble and Ford has girlfriend problems—is 50 utterly wasted minutes.

One of Season One’s most interesting threads is found in many of its episodes opening with mysterious glimpses into the life of a man who looks to be Season Two’s next villain. Why not flesh that out a little more to replace the minutiae?

As for Groff’s lead turn, I’d say the jury’s still out. While my wife informs me he got famous by simulating on-stage sex with Lea Michele on Broadway and starring in HBO’s Looking, I’m fairly sure Groff is actually a rebranded Glenn Howerton (Dennis Reynolds from Always Sunny). Either way, I can’t figure out if he’s trying to play a sociopath interviewing psychopaths, or if sociopathy is just an affectation of Groff/Howerton. His character and performance are just a bit stilted. But perhaps the series is going somewhere with that.

Mindhunter clearly has some of the better hallmarks of Fincher’s work—cinematographically, audiovisually, in terms of character development, and in its demented, mystifying intrigue. It just needs to make up its mind where it wants to go. Hopefully, Season Two will remedy that. In the meantime, it’s definitely a “must-watch” for Zodiac and Fincher fans.