An original narrative is roughly as valueless to a post-apocalyptic film as a stack of Benjamins is to its characters. Need proof? Indulge me for a moment:

Zombieland is, of course, a parodied recapitulation of every zombie movie ever (wherein boozing pretty much goes hand-in-hand with walker-slaying). And that Walking Dead premise of searching for the sanctum away from the undead hordes has been done ad nauseam (28 Days Later, I Am Legend, etc.).

In 2010’s Stake Land, a young, skittish boy is saved and turned into a man by a grizzled, hard-drinking reaper of the undead, with whom he takes off for a reputed safe haven. Yes, the concept is about as fresh as a decomposing corpse in a farm house off a shady dirt road. But, as in all matters of postapocalyptic survival and success, its the execution that counts. And for a low-budget, devilish little vampire road-movie, Stake Land hits the wooden pike on the head.

“Didn’t you see Zombieland, kid? We ain’t gettin’ nowhere without some car drinkin’.”

The acting is formidable enough, and the vamps—while nothing special—are far superior to the CGI bastardization that occurred in the aforementioned “meh”-inducing adaption of Richard Matheson’s brilliant novel I Am Legend.

I Am Legend: CGI that made South Park look like photorealism.

So if I’m pointing to one reason why Stake Land is among the best postapocalyptic films of the past decade, it comes down to one man: Jim Mickle.

Mickle is one of two up-and-coming, grim-bent directors whose every project I eagerly await (the same way I did for Neil Marshall after Dog Soliders and The Descent… Let’s just pretend Centurion and Doomsday never happened). The other would be Jeff Nichols, who’s basically the Daniel Woodrell of cinema. Nichols’ Take Shelter and Mud (on Netflix Instant) are both of the must-watch caliber. And his 2007 project, Shotgun Stories (also on Instant), is a great companion piece for anyone who liked Blue Ruin. I also love that Nichols has chosen to make the great Michael Shannon the Dicaprio to his Scorsese. 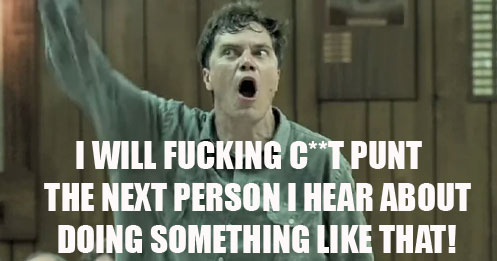 But back to Mickle. He’s got a deft hand for filming the bleakest and moodiest of landscapes and imbuing his pared-down tales with an unrelenting current of suspense. After knocking it out the park with Stake Land, he did We Are What We Are (also on Netflix Instant—wouldn’t highly recommend it, but again, great cinematography and totally worth your while). His most recent project was Cold In July, which just so happens to be my favorite movie released this year (rent it if ye can).

OK, let’s get into the meat and bones of Stake Land—the best vampire flick since Let the Right One In. Our aforementioned boy-and-man duo are Martin (Connor Paolo) and  his mentor, known simply as “Mister.” After a crash-course in vamp killing played over title credits, Martin becomes the Karate Kid to Mister’s Mr. Miyagi (you obviously can’t go wrong with a good Mister.)

What also makes Mister cool is that he’s a dead-ringer for Jimmy Smits’ Nero character on Sons of Anarchy.

An opening montage of stark countryscapes is narrated by Martin, who lets us know that D.C. has fallen and with it, the nation as we know it. Major cities are to be avoided, and religious zealots run the show, capturing and unleashing vamps upon their enemies in the form of bipedal biological weapons. To avoid this shitstorm, Martin and Mister decide they better make their way to a purported sanctuary known as “New Eden.”

On the way, we’re introduced to several interesting vamp mutations. There are “beserkers” (the oldest of the vamps, and hard to kill), “scamps” (kiddie vampires who are still in the teething stages), and a more evolved brand of vamp that harkens the character of Robert Neville from I Am Legend. There’s also some great George Romero camp thrown in by the way of an undead Santa. 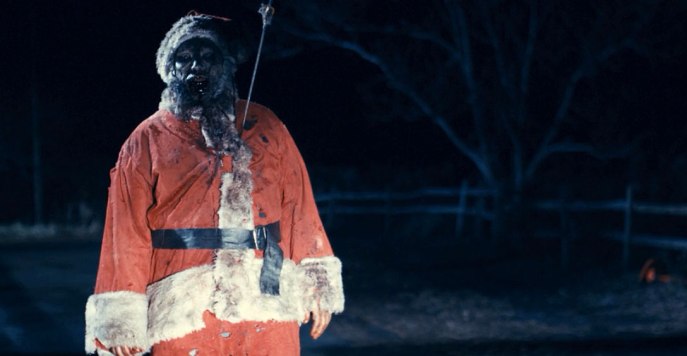 All I want for Christmas is my two front fangs...

Stake Land borrows across genres, tropes and oft-explored notions (Does garlic work? Maybe, maybe not, but it can’t hurt.) In no way is this film reinventing the wheel, but for a beautifully shot, low-budget vampire thriller, it really couldn’t get much better. Fans of The Walking Dead, particularly, should watch this without hesitation. After all, it does in 98 minutes what that show’s been grinding at for five years.

*Remember: IMDb grades for horror movies run much lower than for dramatic fare of equal caliber.