The eight-part Discovery Channel series Manhunt: Unabomber is one of the most thoroughly captivating, entertaining pieces of bullshit in the entire canon of true-crime TV.

Bullshit because Manhunt takes narrative liberties that are extreme even for Hollywood. The fabrication starts with a focus more on the FBI Unabomb investigation than on Ted Kacyznski. Nothing wrong with this approach, of course. But when a minor player in the real case (profiler Jim Fitzgerald, here Sam Worthington in the lead role) is turned into a modern-day Sherlock Holmes—and his near-omniscience is only exaggerated by pitting him as a stereotypical underdog genius—the formula might be hard to swallow for true-crime die-hards looking for the level of point-by-point attention to historical detail that, say, Zodiac obsessed over.

On the flip side, if you view this thing merely as an exercise in historical fiction (rather than the true-crime retelling it poses as), you’d be hard-pressed to find a more engrossing piece of detective TV over the past couple years.

Not exactly selling itself…

While we’re on the subject of missteps by an otherwise-
phenomenal series, I’d be remiss if I didn’t mention the reason it took me a year to get around to watching this: piss-poor marketing. Take the reason half the world has seen Mindhunter (a series incredibly similar, and no more compelling) and not this: With the dubious Discovery Channel stamp on a bland, gray canvas featuring an unrecognizable actor posing as the Unabomber, the cover art here suggests a hammy, low-budget direct-to-DVD thriller. This couldn’t be further from the truth.

Again, A-lister Sam Worthington stars (Netflix has increased his facial presence on its streaming page since they picked this up in late-2017). Manhunt also spares no expense on its strong cinematography, recreation of period and place, and reputable side cast (Jane Lynch as Janet Reno, Mark Duplass as Kaczynski’s brother). It actually feels a lot closer to the high-quality cinematographic and suspense work of Fincher in Mindhunter and Zodiac than it does, say, Lifetime’s Jodi Arias story. 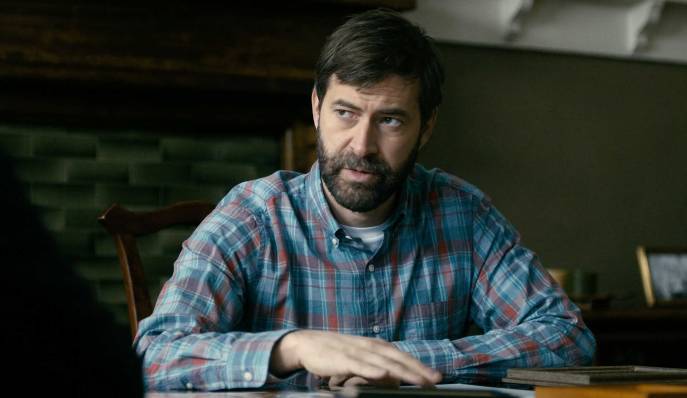 And where Worthington does a fine job in a hyperbolized role, one of the greatest accomplishments of Manhunt is Paul Bettany’s dynamic portrayal of Kazcynski. Rarely do serial killer stories so impactfully display the humanity of their… serial killers.

And that’s probably a good segue to get into the narrative meat of the show.

The first episode opens with a calm-yet-sinister voiceover imploring: “I want you to think about the mail, for a minute. Stop taking it for granted like some complacent, sleepwalking sheep. And really think about it. I promise you, you will find the U.S. mail a worthy object of your contemplation.” This device (Bettany reading from the Unabomber letters and manifesto) is employed periodically throughout the series, both as a tool to get into Kaczynski’s mind and also as an empathic ploy that begins to explain why our protagonist (Worthington) becomes dangerously smitten with Kaczynski’s theories. 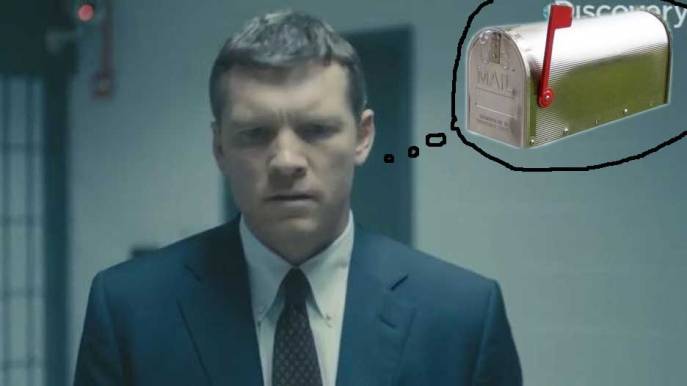 As Fitzgerald ascends from average-Joe Philly beat cop to he-man detective, he’s brought in by the FBI to build a profile on the elusive Unabomber. With the help of a faithful assistant (Keisha Castle-Hughes), Fitzgerald probes the case from new angles, identifying patterns in the Unabomber’s letters that lead to what he dubs “forensic linguistics.”

As bosses second-guess him at every turn, Fitzgerald continually saves face with last-moment revelations. This is not a spoiler, as Fitz and Ted face-off early on—part of Manhunt‘s effective nonlinear narrative. (They never met in real life, if you were wondering.)

While Worthington’s Fitzgerald is clearly a fabricated hero-character constructed for the sake of thrilling cinema, that construction is quite effective. Perhaps part of what makes Manhunt so intriguing is that as Fitz’s Kaczynski obsession begins to manifest in his personal behavior and ideologies (down to living in an isolated cabin in the woods and growing a laughably fake beard), we are confronted with a dark and ugly truth: Ted Kaczynski, the man responsible for the brutal murder and disfiguration of so many innocents, was in fact a sane, brilliant ideologist whose theories were, by and large, very relatable to good people. Like Fitz. Or you. Or me. “He just has the courage to live according to his ideals,” Fitz says at one point when refuting the popular notion that Kaczynski, was insane. “I respect that.” 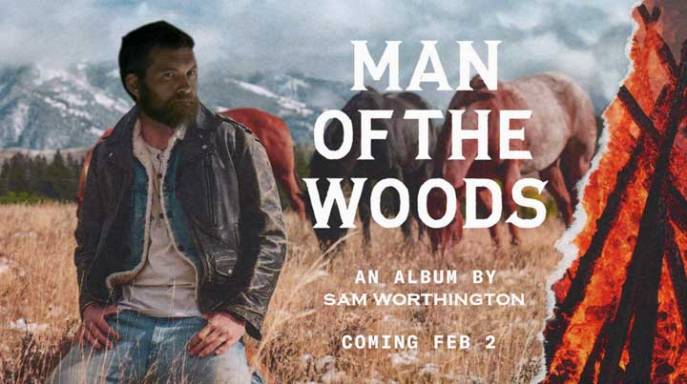 There’s no denying that Kaczynski is painted with a very sympathetic brush in this series—one that might understably offend families of the innocent people who Kaczynski maimed and killed. But again, part of what makes the Unabomber case so interesting is that Ted Kaczynski wasn’t a psychopath or lunatic, but rather a passionate human who did some horribly misguided shit to get his desperate plea about the state of humanity across to the rest of humanity.

One particularly poignant and haunting scene shows Bettany frolicking in the woods to a classical symphony played on an old gramophone. Here, he looks like some ethereal pan creature—a hybrid of Thoreau and Baryshnikov—enchanted by the sublime beauty of nature, and an inextricable part of it. It’s this side of Kaczynski that’s relatable.

Bettany brings a disturbing level of gravity to his portrayal of Kaczynski, showing his many sides: the idealistic naturalist who cares for and is enchanted by the world; the creepy, angsty social outcast; the egomaniacal tortured genius who decided to play god.

In all, this is an expertly crafted detective series with an incredible turn by its antagonist. I’d be playing spoiler if I were to get into my views about why this series is both Grade-A cinema and Grade-A bullshit. Suffice it to say that you’ll probably see what I’m talking about as it unfolds.