OK, to be fair, the most hyperbolic of these critics wasn’t actually a critic. It was William Friedkin, director of The Exorcist, who tweeted, “I’ve never seen a more terrifying film than THE BABADOOK.” That’s rather lofty praise from the guy who made what everyone and their mother seem to agree is the greatest horror flick of all time. (NOTE: I disagree with you and your mothers.)

Still, this seemed to unleash an avalanche of critical praise that built the flick up to near-Blair Witch levels of hype. So when I went to go see it in theaters last year, I knew a letdown was inevitable.

The Babadook is actually a damn good horror movie. Let me illustrate this to you with my own superlatives. …  It’s the best horror movie of 2014 (not a great year for the genre, but still); it’s one of the most emotionally compelling horror films of the past decade; and it features one of the best female lead roles in the history of the genre.

Enough quotables for you? Let’s talk about the movie…

Amelia (Essie Davis) lives with her son Samuel (Noah Wiseman) in a creaky, barren two-flat in Nowhere, Australia. She’s a lonesome, sex-deprived widow whose husband died six years ago when he was transporting her to the delivery room.

Samuel—the reward of that tragic night—is an amateur magician who shoots other kids with darts, is prone to fits of rage, believes in the bogeyman and regularly screams like a dying hyena. In short, he’s the type of problem child that makes one feel sympathetic toward the Chinese government’s stance on population control.

Note to self: forget about fathering children…

Samuel is also the first of several shopworn genre motifs that Babadook introduces. He’s the prescient, mommy-coddled oddball plagued by demons (see: The Sixth Sense, Insidious,The Ring, etc.). I truly look forward to the day when the creepy-kid formula is thrown out the window of horror filmmaking. In the meantime—and to Wiseman’s credit—Samuel is more of a believably tortured soul than he is Child of the Corn. (It’s actually a very strong child-acting performance; I personally have just had enough children in my goddam horror movies.)

Anyway, one day Samuel stumbles on an ominous red book called “Mr. Babadook.” Amelia hesitantly reads it to him—until she realizes it’s basically an Edward Gorey bedtime story from the depths of hell. And thus an unspeakable evil is released.

While all this may sound incredibly sinister, it should be noted that The Babadook is not the standard jump-out-your-seat horror thriller. It’s more slow-building, high-tension psychological horror with strong emotional overtones tied to the concept of grief. What makes this formula work so incredibly is, first and foremost, the transformative work of Essie Davis.

Her beautiful-but-disheveled Amelia wears an exhaustive home life on her face, and the weight of her hellish, grief-stricken burden is beyond just palpable. Davis’ acting is the kind of stuff Oscars are made for. Unfortunately, The Babadook is an indie horror movie, and therefore unpalatable to the mild-mannered octogenarian elite who bestow such honors. (I’d venture that the late Johnny Cochrane would find it humanly fucking impossible to make a compelling argument that Rosamund Pike’s performance in Gone Girl is on par with what Davis did here.)

It should also be mentioned that this flick is the best tale of grief in horror since The Descent (a personal horror top-five). I can’t really go into the uncanny similarities between the two films without giving much away, but I think you’ll get the gist.

Another strong point of Babadook is that despite its tendency to rely on horror tropes, the narrative and emotional undercurrent of the film are anything but formulaic or stilted. The film is about the roots of a troubled child’s dark imagination as much as it is about a mother coming to terms with hell on Earth. Narrative analogies in the form of old cartoon and movie clips played in Amelia’s home bring both wit and ominous artistic flair to the mother and son’s predicament. (In particular, digging into the annals of Georges Jean Méliès’ work to provide imagery for the titular character is a stroke of cinematic brilliance.)

Sure, it’s slow and has its fair share of contrivances. But while you might want more monster out of something that masquerades as a monster movie, you couldn’t ask for more out of Essie Davis, and you’d be hard-pressed to find a better allegory for the pitfalls of grief in any genre.

Adolescent vampires, as they pertain to horror, represent a relatively unexplored genre. Maybe I should specify before incurring the wrath of Stephenie Meyer disciples everywhere: Adolescent vampires as the archetypal monsters-under-the-bed are a bit of an unknown commodity.

In fantasy lore, it’s probably understood that humans would wait until they’re at twenty-something Brad Pitt levels of attractiveness and physique before taking the immortality plunge. Why let the fangs sink in well before you develop a devil-may-care smile and a dashing ponytail?

Perhaps this is why I felt Let the Right One In, based on the Swedish novel of the same name, was so groundbreaking the first time I watched it. Little kids (in all of their inherent creepiness) have been done to death in horror films, dating back to 1976’s The Omen and continuing through 2010’s Insidious. It’s the innocence paired with evil, along with active imaginations, that make the young such scary vectors of the paranormal. 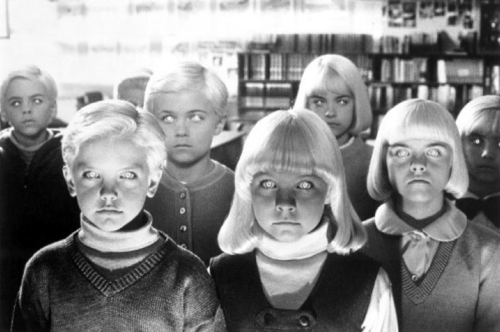 Let the Right One In—available on Netflix Instant—bites into this formulaic trope with fresh fangs and manages to give it new life. Bullied 12-year-old boy Oskar makes friends with a recently arrived neighbor named Eli, a girl around his age. After a little bit of hesitation on both ends, the two develop a very close friendship. Oskar soon discovers that Eli isn’t quite what she seems, and is in reality an ageless vampire that requires daily feedings of fresh human blood to remain satisfied.

(MINOR SPOILERS AHEAD) After Eli’s human caretaker dies, Oskar assumes the role of her chef, wrangling human prey for her consumption. Eli eventually has to leave amid the unexplained disappearances of her victims, but not before she returns the favor and helps Oskar in one of my favorite final scenes in any horror film. Ever.

This movie was remade rather unnecessarily for American audiences in 2010 under the moniker Let Me In. The film wasn’t bad per se, but rather echoed the laziness of Hollywood in churning out unoriginal, low-risk product. To make up for this, director/screenwriter Matt Reeves changed a few components of the original, some for better and some for worse. So it wasn’t just Psycho, in color, starring Vince Vaughn.

“My hotel’s so fuckin’ money and you don’t even know it! I got this peephole for watchin’ all the beautiful babies.”

Let the Right One In’s environment is mysterious, still and snowy. For anyone who’s ever lived in cold climates that receive lots of the white stuff, there’s sort of a blanketing quiet that is the signature of the season. It lends itself so well to the film’s disturbing and contemplative tone, and the external shots are downright eerie. 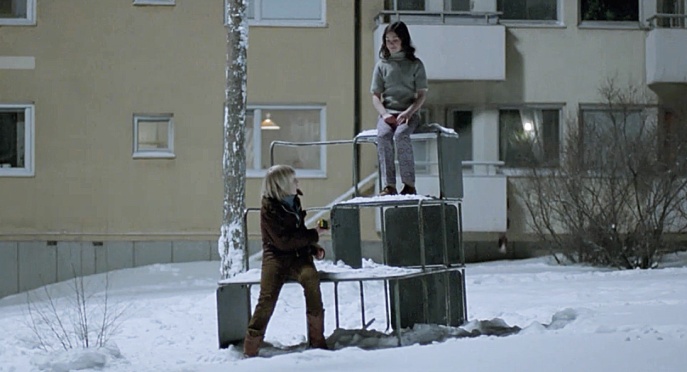 Several scenes in Let the Right One In were shot in Luleå—a coastal city in northern Sweden with a subarctic climate.

In Let Me In, they choose the sandy scientific haven Los Alamos, NM as the backdrop. It’s not an awful choice for a horror film by any stretch, but you don’t see enough of the environment for it to be a major player like it is in the original. There’s some spooky shit that occurs in rural New Mexico that doesn’t involve meth or Los Pollos Hermanos distribution lines, but the remake doesn’t quite spotlight the “where” as effectively as the original. It just sort of comes across as Anytown, USA, which was disappointing for someone who lived for several years in New Mexico and knows how disquieting the desert landscape can be.

Kåre (Oskar) and Kodi (Owen) capture the awkward dispositions prescribed to their respective characters quite masterfully. Both are bullied loners in their worlds, saving things like newspaper clippings reporting gruesome crime scenes while also electing to stay indoors at all times where it’s safe. The real edge of the original, however, comes in the strength of Lina’s performance (Eli) vs. Chloë’s (Abby).

Chloë Grace Moretz is a fine child actress who is no stranger to the genre, having appeared in a starring role in yet another horror remake (2005’s The Amityville Horror), but she’s just not … spooky enough? An important component of the vampiric character is that her/its backstory is never fully explained and is, for all intents and purposes, androgynous (alluded to in both films).

Lina’s Eli is neither too feminine nor masculine, and her eyes depict the knowledge and experience of someone who would be many years her senior. A difficult casting choice to be sure in choosing someone who is 12 years old and is in actuality thousands (?) of years old, but it’s an element of believability I felt the original film payed a significantly larger amount of attention to.

SPECIAL EFFECTS / CGI: Let the Right One In vs. Let Me In

It’s not all doom and gloom for the Americans. Let Me In had a much greater budget to work with than its predecessor did, and it certainly shows. Something I could never truly get over in the original film was a scene involving a person spontaneously combusting, and a room full of cats. Oddly enough, it wasn’t the fire I took offense to, but the litter of computer-generated cats. What is intended to be a shocking scene displaying how once again the animal kingdom is privy to any type of evil activity turned out to be nothing more than a lazily executed internet meme. I’m not positive on the animal laws in Sweden and how they pertain to treatment/screen time (I know the states have since revised their laws following 1980’s Cannibal Holocaust), but the whole scene is a little bit goofy.

All said, both films are certainly worth a watch, especially the original version (and its excellent corresponding novel). Let Me In and Let the Right One In offer a welcome departure from both found footage dump-offs and toned-down PG-13 monsters that have been cluttering the modern horror shelves.

Vampires have always been the “thinking man’s villains” of the genre—their clout further cemented by somewhat fictionalized historical tie-ins. It’s that foothold in reality, however misconstrued it may be, in which horror films really manage to hit their groove. Both LMI and LTROI prove that it’s still possible to breathe life into a genre without trying to completely reinvent the wheel.

Let the Right One In  (Available on Netflix Instant)
IMDb: 8.0
Grade: A

ABOUT THE AUTHOR: Adam Fox resides in West Hollywood, CA, with a wonderful lady and a crippled cat. When he’s not devising ways to get out of driving around the Greater Los Angeles Concrete Jungle, he is an unabashed Masshole with a penchant for drunkenly cheering on the Red Sox and Patriots. In addition to serving as the Assistant Editor for SB Nation’s Pats Pulpit, Adam has written for ESPN, Paste Magazine, the Weekly Alibi and the Mountain West Connection, among others. twitter.com/lefoxtrott